Listening to the commencement address by the new dean, Professor Papp turned to a woman sitting beside him.

“Can you believe that the trustees named someone so ugly to be our new dean?”

Stiffening, the woman said, “I beg your pardon, but do you know who I am?”

Turning to study her, the professor replied, “Can’t say I do.”

“I’ll have you know that I am that ugly man’s wife!”

Drawing himself erect, the professor shot back, “And do you know who I am?”

“I haven’t had the pleasure,” she said icily.

A University of Georgia student was visiting a Yankee relative in Boston over the holidays. He went to a large party and met a pretty co-ed. He was attempting to start up a conversation with the line, “Where does you go to school?” The coed, of course, was not overly impressed with his grammar or southern drawl, but did answer his question. “Yale,” she replied. The Georgia student took a big, deep breath and shouted, “WHERE DOES YOU GO TO SCHOOL?”

The psychology instructor had just finished a lecture on mental health and was giving an oral test. Speaking specifically about manic depression, she asked, “How would you diagnose a patient who walks back and forth screaming at the top of his lungs one minute, then sits in a chair weeping uncontrollably the next?”

A young man in the rear raised his hand and answered, “A basketball coach?”

At New York’s Kennedy airport today an individual, later discovered to be a public school teacher, was arrested trying to board a flight while in possession of a ruler, a protractor, a square, a slide rule, and a calculator.

The Attorney General believes the man is a member of the notorious Al-gebra movement. He is being charged with carrying weapons of math instruction.

“Al-gebra is a very fearsome cult, indeed”, the Attorney General said. “They desire average solutions by means and extremes, and sometimes go off on a tangent in a search of absolute value. They consist of quite shadowy figures, with names like “x” and “y”, and, although they are frequently referred to as “unknowns”, we know they really belong to a common denominator and are part of the axis of medieval with coordinates in every country.

“As the great Greek philanderer Isosceles used to say, there are three sides to every triangle.” When asked to comment on the arrest, President Bush said, “If God had wanted us to have better weapons of math instruction, He would have given us more fingers and toes.”

Upon entering a laboratory, you see an experiment. How do you know which
class it belongs to?

If it stinks, it’s chemistry.

If it doesn’t work, it’s physics. 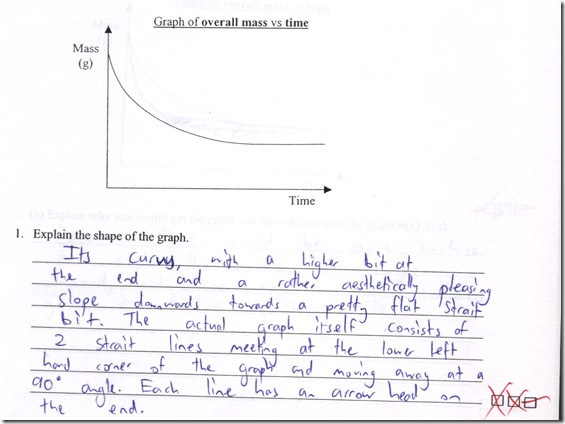 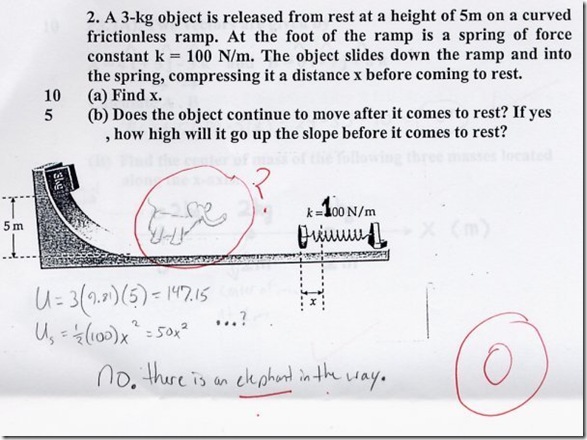 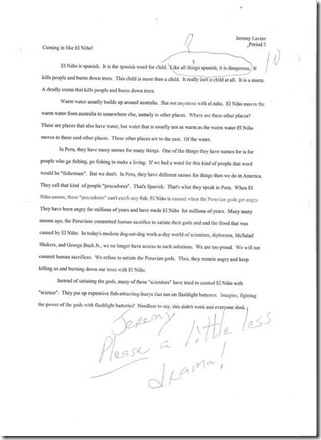 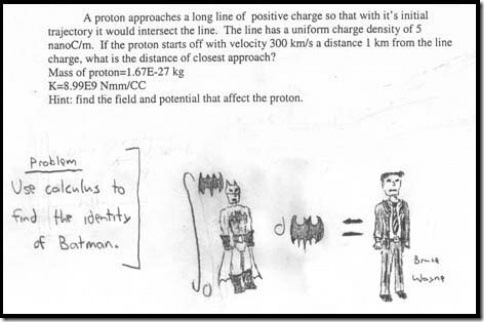 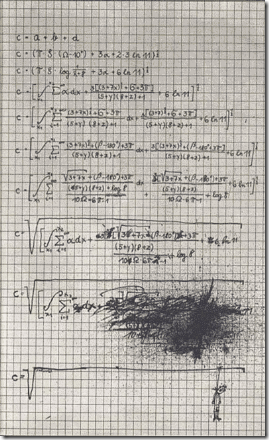 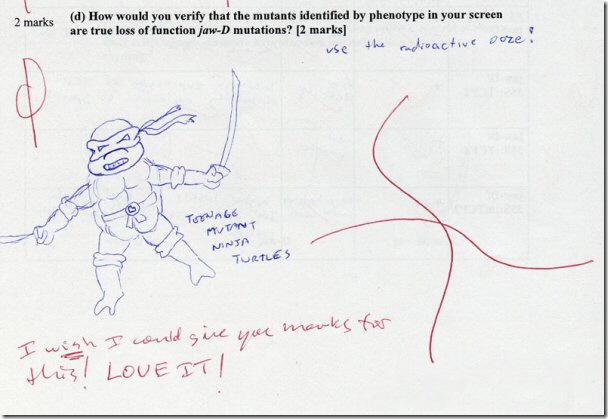 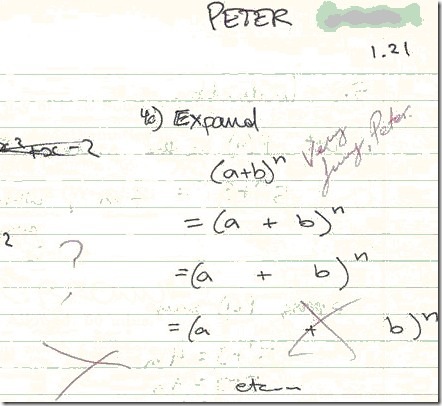 Here is a list of the ways professors grade their final exams:

DEPT OF STATISTICS:
All grades are plotted along the normal bell curve.

DEPT OF PSYCHOLOGY:
Students are asked to blot ink in their exam books, close them and turn them in. The professor opens the books and assigns the first grade that comes to mind.

DEPT OF HISTORY:
All students get the same grade they got last year.

DEPT OF PHILOSOPHY:
What is a grade?

DEPT OF MATHEMATICS:
Grades are variable.

MUSIC DEPARTMENT:
Each student must figure out his grade by listening to the instructor play the corresponding note (+ and – would be sharp and flat respectively).

LAW SCHOOL:
Students are asked to defend their position of why they should receive an A.

Here is an explanation of the school homework policy for the average student. Students should not spend more than ninety minutes per night. This time should be budgeted in the following manner if the student desires to achieve moderate to good grades in his/her classes.

11 minutes calling a friend for the assignment.

23 minutes explaining why the teacher is mean and just does not like children.

8 minutes in the bathroom.

10 minutes getting a snack.

6 minutes telling parents that the teacher never explained the assignment.

9. Iâ€™d be delighted to proofread your book/chapter/article.

8. My work has a lot of practical importance.

7. I wouldnâ€™t never date an undergraduate.

6. Your latest article was so inspiring.

5. I turned down a lot of great job offers to come here.

4. I just have on more book to read and then Iâ€™ll start writing.

3. The department is giving me so much support.

1. No really, Iâ€™ll be out of here in only two more years